Making the most of life after stroke 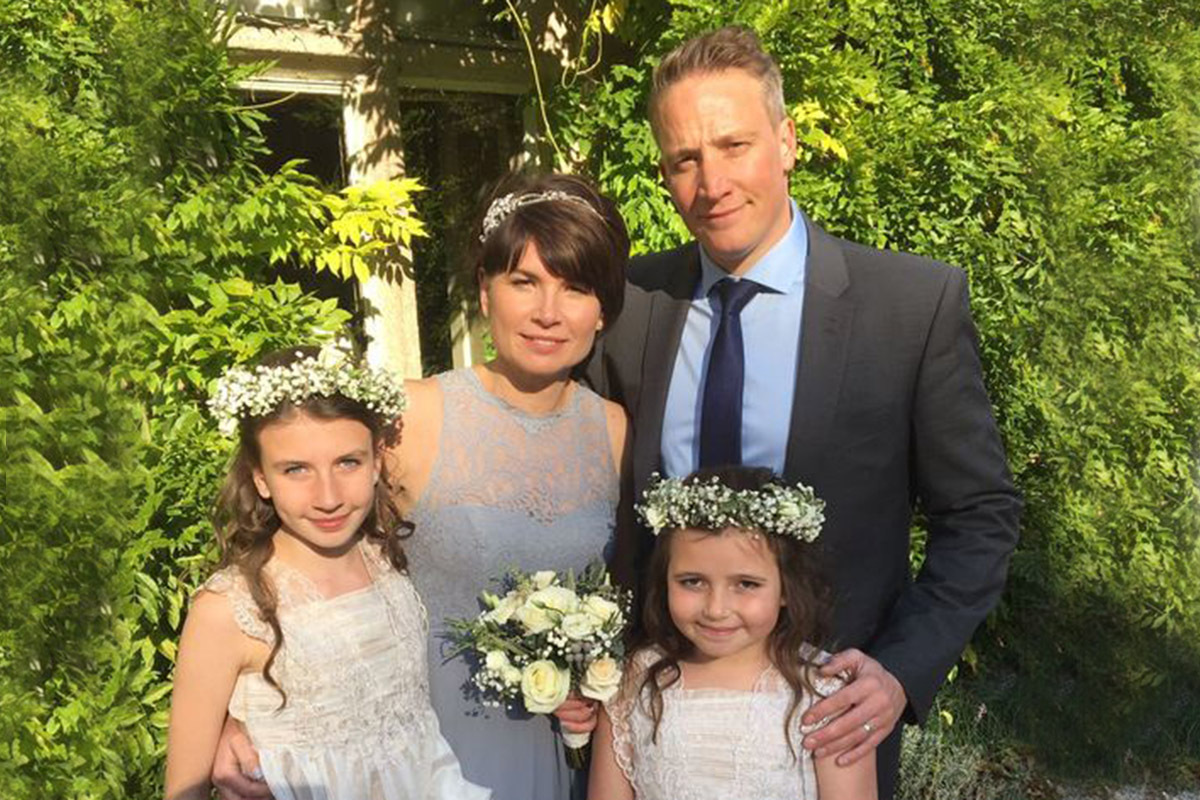 Andy's story is told by his wife, Gemma

"It was a Saturday morning on the 11th July 2015. I was busy in the kitchen preparing breakfast for our daughters, Isabelle and Erin (then 10 and 7). Andy had been complaining of niggling headaches for the past week but we put it down to working long hours as a financial adviser. I will never forget the moment he called out to me that morning – his speech was suddenly slurred and he quickly lost the use of the right side of his body. I called for an ambulance and he was rushed to Southmead hospital where they gave me and our family the news we were all dreading: he had suffered a massive stroke and was being sent for a thrombectomy procedure where they would mechanically remove the blood clot in his brain.

With thanks to the wonderful doctors and the neuroradiologist, their swift action helped to save as much of Andy as they could and tried to limit his brain damage. Once the procedure was over he was sent to the acute stroke ward where his road of recovery would begin. These first few days were the most frightening, we were told of potential post-procedure complications including brain swelling or bleeds. Thankfully Andy made it through, but he couldn't speak, move or swallow at this point and we were all devastated.

From the Monday 13th July things started to look brighter and I found Andy that morning sat on the edge of the bed with the Occupational therapist and he gave me the best smile. I knew from that moment that we would take things day by day and celebrate any changes no matter how big or small. Speech therapy commenced straight away. It was a huge relief to see his understanding of what was being said and he responded with nods and shakes of his head. That day he took his first few steps and we were so happy. Andy was discharged two and a half weeks later.

Andy is very determined to make as full a recovery as possible. He does now have aphasia, with reading problems combined, but physically he is the fittest he has ever been. He enjoys bike rides and going to the gym. Andy has benefited by being part of Bristol After Stroke, not only has he enjoyed meeting new people going through the same experiences, he also found the ACTion after Stroke and Next Steps courses very useful. Very soon he hopes to work as a volunteer for Bristol After Stroke and wants to put back in as we have got so much support from them as a family.

With accepting what has happened to Andy, we have been able to move forwards and plan for the future. He celebrated his 40th birthday in 2016 and we had a big party with family and friends to show that we haven't given up and that he will continue to improve. We are all so proud of him and what he has achieved."

Donate now Your donation will help us to help stroke affected people now and in the future
Volunteer Join our team of dedicated volunteers to help make a difference
Share your story Your story can help inform and encourage others suffering from the effects of stroke
Bristol After Stroke is registered in England and Wales under Charity Company Number: 11841993 and Charity Number: 1182124 at The Gatehouse Centre, Hareclive Road, Hartcliffe, Bristol, BS13 9JN. We use cookies to improve your experience using this website.
Log in | Powered by White Fuse